Results: Migrating to digital TETRA communications has transformed Swedish policing. Officers are operationally more responsive and efficient, resources can be deployed and coordinated quickly at the point of need, and officers can engage with ease in national and cross-border inter-agency collaborative operations.

The migration to digital TETRA communications has enabled Sweden's police gain more confidence in the war against crime. Inter-agency operations are invaluable when it comes to staying one step ahead of criminals. In December 2009 a massive nationwide police sting netted 40 criminals implicated in an illegal steroid doping ring. The success of the operation - which involved police, customs and the revenue service - depended on the ability of each organisation to communicate and operate in complete synchronicity.

Tomas Högström, System Manager at Rikspolisstyrelsen, the National Police Board, played an important role in the decision to deploy TETRA hand-held radios in Sweden: "Today's criminals are technically advanced: we need to be able to match our enemy. We're now able to coordinate operations with confidence in the knowledge that our communications are totally secure."

The highly secure system makes it impossible for criminals to eavesdrop police communications, giving Swedish police the ability to use radio communications to position teams at the scene of a crime or coordinate simultaneous raids at multiple locations.

In addition, Sweden's police have been able to engage in a number of successful cross-border operations and breaking international drugs rings in those countries.

Sweden's police forces face a variety of policing challenges unique to their particular regions. This diversity includes policing densely populated urban environments, as well as responding to the needs of geographically remote communities where the mountainous terrain can make effective police work a challenge.

"Officers need to be confident that whatever the geography or working environment, they have the range and ability to communicate quickly and clearly with colleagues," says Högström.

18 of Sweden's 21 autonomous police districts (3 districts left to deploy) exploit the uniquely flexible menu structure of Sepura's hand-held radios to fit with their own particular operational needs . Police officers are able to personalise their own radios, and directly access crime registers.

The rugged radios have proved a hit with officers in the field. Concurrent voice and data communications make it possible for officers to share real-time information with their control room and one another, as well as other emergency services. What's more, a unique noise suppression feature enables users to hear voice messages over the loud, but reassuring sound of sirens and maintain clear and uninterrupted communication with colleagues.

Sharing information is now much faster and easier than before. At the touch of a button, officers can reach colleagues or distribute information to partner agencies, and even access the whole national TETRA network. Officers can share information with groups working on the same incident, for example.

"TETRA has enabled us to make vision a reality when it comes to seamlessly integrated communications between civil protection and rescue agencies," says Högström. "Being able to work in unison enables us to coordinate our field resources much more effectively when it comes to responding to accidents and emergencies."

Thanks to a highly sensitive integrated GPS receiver in Sepura's hand-portable radios, control room staff will soon be able to accurately pin-point individual officer locations, even in hard to penetrate 'urban canyons'.

"We can direct emergency backup to officers in the field in the event of an incident or 'man-down' scenario," explains Högström. "And, it gives our operatives a better idea of the deployment of our people when we're coordinating a major operation in an area."

A new era of working

Thanks to both Sepura and Swedish Radio Supply AB (SRS), Sepura's in-country distributor, Swedish policing has been propelled into the 21st century, arming officers with an array of sophisticated communications that make them more responsive and better equipped to face today's technically advanced law breakers.

"Crime prevention and response has been transformed at a local and national level," say Högström. "Close cooperation with SRS has been instrumental in ensuring our police are now better equipped to deal with the trials of modern policing. This relationship is working extremely well for the Swedish police."

Högström concludes, "Our choice of TETRA terminals which we made back in 2005 is still the right one. Other TETRA terminal suppliers have successfully copied some of Sepura's products' USPs, but these are not yet as complete as the solution that Sepura radios are offering us". 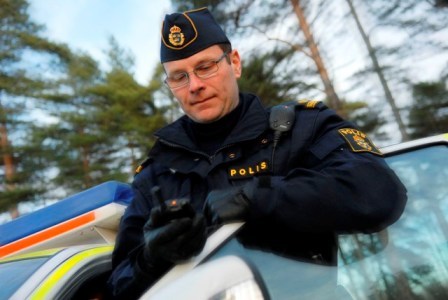