As many as 12,000 people work at CERN (the European Organization for Nuclear Research) at any one time, including physicists and engineers from dozens of countries whose collaborative work is aimed at gaining a greater understanding of the fundamental structure of the universe. Many of the discoveries made at CERN help improve everyday life by enabling advances in areas ranging from medicine to computing.

CERN's operations are distributed over an area of 60 km2 that straddles the border between France and Switzerland. In addition to 600 surface buildings, CERN has over 50km of underground tunnels, including a 27km-long circular tunnel located some 50-150m underground containing the Large Hadron Collider (LHC), the world's largest and most powerful particle accelerator. In 2013, the Nobel Prize in Physics was awarded jointly to François Englert and Peter W. Higgs for their theoretical work on the Higgs boson, whose existence was recently confirmed by the ATLAS and CMS experiments at the LHC.

To ensure everyone's safety in CERN's unique environment the organisation employs a highly specialised fire brigade who are trained to deal with a wide variety of risks.

Results: Migrating to Sepura's digital TETRA infrastructure has met all of CERN's requirements for a reliable, effective communications system for its fire brigade and other user groups across the site. The solution for lone worker protection has already proved its worth by helping to save a life.

Meeting the challenges of underground communications

With so much of the facility located underground, it was a challenge for CERN to implement reliable communications systems for its fire brigade and for the security and maintenance teams who carry out other safety-related work. Analogue radio systems were already in use, but their limitations included a lack of interoperability between different systems, no ability to track an individual's precise location, and no connectivity to the French or Swiss public safety networks.

CERN organised a call for tender for an integrated replacement system that overcame these limitations, and selected Sepura's bespoke critical communications solution. This covers CERN's entire site, both above and below ground, including the LHC tunnel. Three radio antennas support over 300 TETRA terminals, and the network is fully redundant

The TETRA network enables communications for CERN's fire brigade, security and maintenance teams. In addition, if members of the French or Swiss public safety services are called to an incident, they can use their existing TETRA radios throughout the infrastructure deployed for CERN.

The right TETRA radio for each user group

CERN's firefighters use Sepura STP8X hand-portable radios for all their operational communications. Rugged and robust, these intrinsically safe devices are waterproof and dustproof in line with the latest and most stringent V6 of the IECEx/ATEX standard. They provide CERN's firefighters with the loud, clear audio and very high-resolution displays that are critical for effective communication in noisy, smoky and hazardous environments. Their tactile keypad is easy to use even when wearing the heavy gloves that are part of the fire brigade's protective gear.

"Sepura's reliable ATEX hand-portables help our firefighters stay safe and effective, because they carry on working under the most extreme conditions," says Yann Léchevin, Projects Leader and Chef d'Etat-Major within CERN's Fire and Rescue Services. "On top of that, firefighters can use them to send short text messages such as 'Arrived at destination', enabling us to monitor the progress of a call-out in real time."

Wardens, maintenance engineers and other groups working at CERN use Sepura STP8000 hand-portables and vehicle- or desk-mountable SRG3900 mobile radios. Supplementing CERN's existing closed GSM network that enables point-to-point communications, the TETRA devices are typically used to set up talk groups for teams, or to enhance the personal safety of individuals working alone.

"When we demonstrated the Sepura radios ahead of rollout, all of the different user groups quickly understood the benefits they offered and were very taken with the radios' user-centric design. In fact, some of our colleagues were quite reluctant to hand the radios back at the end of the day!" says Aurélie Pascal, Telecommunications Engineer within CERN's IT department.

Individuals often work alone in vast areas underground at CERN, and ensuring their personal safety is a top priority. As well as an emergency button users can press to call the fire brigade directly in an emergency, all the Sepura STP8000 and STP8X hand-portable radios in use at CERN include sophisticated 'man-down' functionality. Based on motion sensing technology, the radio automatically alerts the fire brigade if a user is motionless or suffers a serious impact.

These radio-based features are combined with Sepura's STProtect in-building tracking and location solution, consisting of beacons and software that enable a radio user's position to be precisely displayed on a map of the CERN site if a man-down alarm sounds, and accelerating the rescue operation.

Sepura's GPS localisation functionality was put to the test when a CERN security guard working in isolation fainted. "Thanks to the man-down alarm and the ability to pinpoint his location, he was rapidly found and rescued," reports Léchevin. "We couldn't have asked for a better demonstration of the benefits of the Sepura lone-worker solution."

A partnership built for the future

The TETRA network and radios are meeting all of CERN's requirements for reliable and effective communications both above and below ground. For Frédéric Chapron, Head of Communications Support within CERN's IT department, there are no regrets about having selected Sepura:

"Sepura developed a powerful solution with the right products for CERN's very particular environment. Additionally, their transparent, collaborative approach reflected our own, giving us confidence that we could work well together. This proved to be the case, and the close working relationship we developed during the rollout looks set to continue into the future." 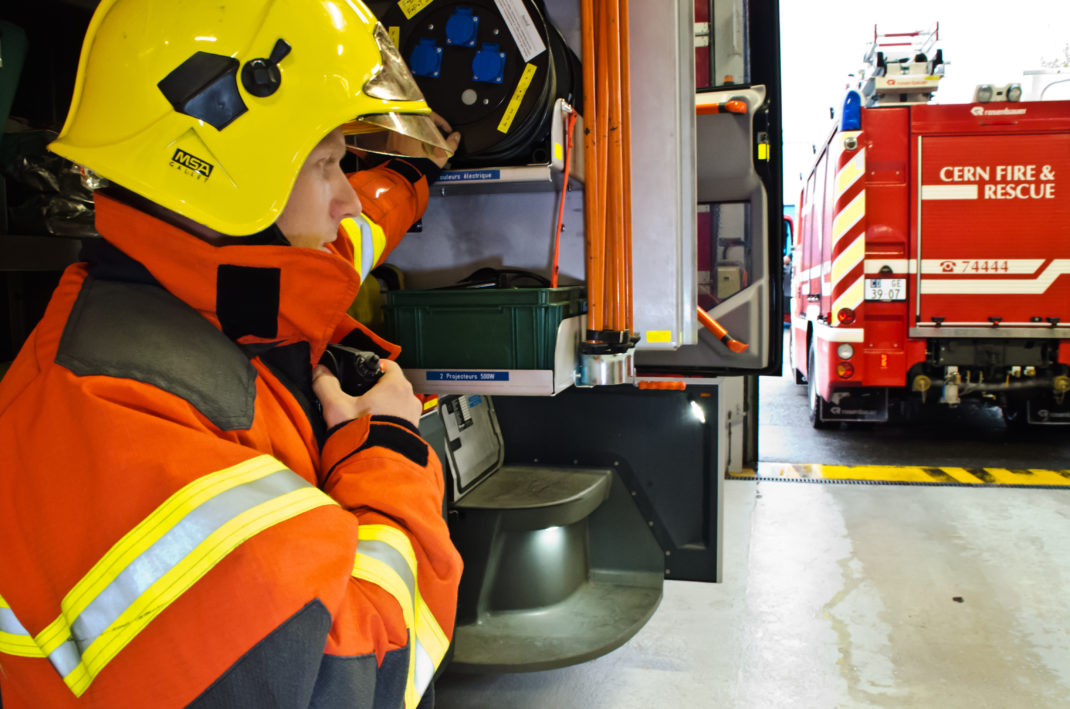