The awards, a collaboration between the TCCA and TETRA Today, recognise excellence in the field of TETRA radio communications and were judged by a panel of communications experts and authorities from across the globe.

The shortlist saw a vast range of entries compete over seven categories in a ceremony held at the London Transport Museum, Covent Garden.

After scooping the award for Best Use of TETRA for Public Safety with its innovative Stop and Search short data application (SDA) - developed in cooperation with Greater Manchester Police - Sepura was also Highly Commended in the Best Use of TETRA for Transport category, for the integrated TETRA network supplied to Malaysian Airports, as well as in the Best TETRA Enterprise Product, for the STP8X.

This success comes hot on the heels of Sepura's recent win at The PLC Awards, where the company carried off the Turnaround of the Year Award.

"We are delighted to have so much to celebrate," said Gordon Watling, CEO, Sepura.

"Malaysia Airports was the first project to utilise the combined expertise of Sepura and 3T to deliver an end-to-end critical communications solution, and the Stop and Search SDA has been exceptionally well received, with one officer calling it, 'The most efficient, simple to use, time-saving idea I have been involved in since joining the police.'

"The STP8X has already become an indispensible communication tool for users in hazardous environments around the globe ... and to have these achievements recognised within our industry is particularly rewarding.

"We've had an extremely successful year, and these accolades act as a testament to the hard work and dedication that goes into each and every Sepura project. They are also, I hope, an indication of the many positive things still to come." 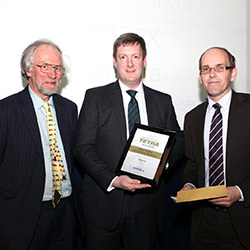