Sepura's partner in France, Sysoco, has successfully tested a gateway radio solution ahead of a planned roll-out at Lyon-Bron and Lyon Saint-Exupery Airports.

The simulation scenario involved attending the scene of an accident between an airplane and a fully-laden fuel tanker. The scenario day was set up to test the level of communications co-ordination between the services during an emergency. The day was also a great testing ground for Sysoco's new gateway solution, based on Sepura SRG3900s, which enables extended communication coverage between ground teams and command and control.

In this exercise, Sysoco used the Sepura SRG3900 from the fire-fighter's command post vehicle as a gateway, to enable communication in local mode between all portable radios within a 1 to 2 kilometre radius.

The use of gateway radios allows Aeroports de Lyon to run a system that links the Fire and Rescue services to the command post of the Saint-Exupery Airport. Sysoco's gateway solution will provide coverage into neighbouring areas of the airport and support nearby Lyon Saint-Exupery airport thanks to the 12 meter high telescopic tower.

Following a successful test day, both Lyon-Bron and Lyon Saint-Exupery airports, now have better coverage in the case of emergencies. 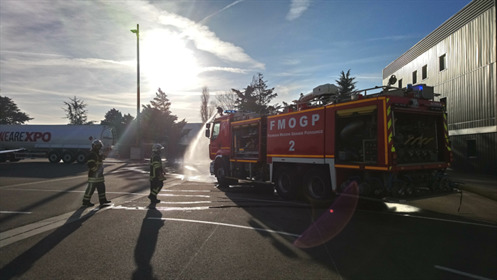