17th April 2015 - Sepura has delivered a complete TETRA solution to the Public Security Directorate of the Mexican municipality of Atizapan de Zaragoza. This significant contract was achieved in conjunction with Jomtel Telecomunicaciones, one of Sepura's established partners in Mexico.

Sepura's TETRA solution is part of an extensive renovation project aimed at upgrading the public security technologies for the entire municipality and comprises the installation of a new command and control room (C4), a new CCTV surveillance system covering the whole city and communication equipment for the police for vehicle installations and more. The TETRA solution will be deployed to public safety end-user organisations comprising the police - including traffic police - fire brigades and civil defence teams. The entire new system was provided and installed by Jomtel Telecomunicaciones.

Specifically, the TETRA solution comprises a 3-sites system including SOLO and FR400 base station, a dispatcher, a gateway to the legacy analogue infrastructure, more than 550 STP9000 hand-portable and SRG3900 mobile radios and also the revolutionary Portalify Image application which enables the delivery to TETRA radios of images taken from CCTV, video recorders or cameras.

Jorge Morera, Director General for Jomtel Telecomunicaciones, commented: "The public security directorate of Atizapan chose the Sepura TETRA solution because it met their technology requirements and was delivered by a respected global supplier. In particular, the customer was very impressed with Sepura radios' high-tech specs, the company's clear commitment to technical support from the very initial stages of the project and the availability of unique and specialised apps. I strongly believe that the revolutionary image messaging application will make a vital difference to police operations when dealing with missing people incidents".

Rubén Fernández, Business Development Manager for Sepura in Latin America, said: "This impressive project is the outcome of our successful partnership with Jomtel who drove the project forward and knew the customer well. Atizapan is the first municipality in Mexico with a complete Sepura TETRA solution, including terminals, systems and applications. We are also very proud to add that it is the very first municipality to benefit from our advanced Portalify application Image already adopted by a variety of Public Safety organisations around the world."

Atizapan, a municipality in the State of Mexico - one of the 31 Mexican states - is located in Mexico City's metropolitan area and is considered the safest municipality in the state and in the entire country. With a population of approximately 500,000 inhabitants, it prides itself on having above-average national levels of investment in social development and welfare. 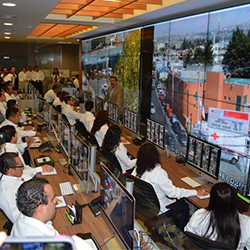