Challenge: Improve the accuracy of data collection during stop and search encounters - in accordance with the 2010 Crime and Security Act - and enhance officer safety by reducing the time needed to complete the procedure, whilst reducing the inconvenience to the public.

Solution: Sepura designed a short data application (SDA) that enables Greater Manchester Police officers to collect stop and search data on their Sepura radios by responding to a series of simple prompts on the radio's screen.

Results: Stop and search data collection is more efficient and accurate. The SDA integrates with back-office systems to transmit data automatically, reducing administration and saving money. Speeding up the procedure enhances officer safety and reduces inconvenience for people who are stopped. Following a successful pilot, the SDA is being rolled out to all 8,000 officers in the Greater Manchester Police force.

Police officers have to complete a lot of forms during the course of their policing duties. Recording their encounters with the public is vital for accountability but the paperwork can sometimes be more time-consuming than the actions it sets out to verify. Any initiative that cuts down on form-filling - yet gathers information accurately and efficiently - will make officers more effective and give them more time to focus on actual policing.

The opportunity to test one such initiative in the field was presented to Greater Manchester Police (GMP) with the introduction of the Crime and Security Act in 2010. One of the focus areas of the act was safeguarding civil liberties - a requirement that prompted a change in the type and quantity of information that police officers must collect when stopping and questioning members of the public. The information was simplified into three responses: the reason why the person was stopped (the 'object'), the relevant law under which they were stopped (the 'power'), and their ethnicity.

GMP, who has been users of Sepura TETRA radios since the introduction of the UK National TETRA network over a decade ago, asked Sepura to find a way of capturing this information on the radios themselves, instead of using paper forms.

Sepura has a track record of working closely with public safety organisations all over the world - wherever robust, reliable and secure communications are critical. It frequently collaborates with customers to design solutions that address specific requirements, as it has done on this occasion with GMP.

"Sepura showed a willingness to invest time and effort to help us make full use of the data capabilities of its radios in addressing the stop and search requirements," says Chief Inspector John Buttress of the Greater Manchester Police.

The solution is a short data application (SDA) transmittable over TETRA hand-held radios. SDAs offer menu-based prompts that drive a simple digital process to communicate tasks and gather information. They're used in many industrial and manufacturing environments, and increasingly in the public transport and safety sectors. Users adopt them readily as data entry is simple and intuitive: the functionality is similar to texting on a mobile phone, which is second nature for most people.

The faster procedure is more convenient for the individual who is stopped, too. In addition, he or she can access a record of the encounter on the police website quickly and efficiently, as the information is retrieved automatically via an online form with no intervention from the police - further reducing the administrative burden.

Greater Manchester Police tested the SDA in its Bolton division, watched closely by police forces across the UK. During the test, the number of stop and search procedures carried out increased, demonstrating the greater efficiency of the radio-based data collection process compared with using paper forms.

The radio's GPS functionality delivers an ancillary benefit: the officer's GPS location is automatically attached to the keyed-in data, and the entry is time-stamped when it enters the back-end database. The pilot has also revealed significant police management advantages in being able to obtain up-to-date information about very recent stop and search activity.

A positive step for officers

The convenience and simplicity of the radio-based process makes it popular with officers, as Chief Inspector Buttress explains: "The Sepura SDA is easy to use, quick and efficient - it can be performed in a matter of seconds. Doing away with the old forms is a huge advantage of this new system."

Greater Manchester Police is now training all of its officers with a view to rolling out the SDA across the force, which serves more than 2.5 million people over an area of 500 square miles. GMP calculates that the reductions in paperwork and administration made possible by the SDA will generate savings in the region of £700,000 a year.

"Sepura is delighted to have helped contribute to safer policing for officers as well as saving money for GMP. When I transitioned from Police Service to Sepura I was keen to find opportunities where technology can really benefit the Police, and the stop and search SDA benefits the Police and public alike," says Jonathan Hamill, Regional Director at Sepura.

"We anticipate that police forces globally will wish to investigate the benefits of short data applications over their Sepura TETRA radios and we have the expertise in place to help pioneer their use for all public safety users." 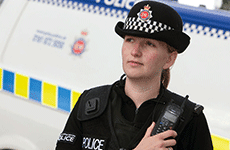